The original structure was built in 1911 by the William B. Altsman family at 1422 Lincoln Street in Portsmouth, Ohio and valued at $14,200 by the Scioto County Auditor's office. Mr. Altsman was the superintendent of  the Selby Shoe Company and was a member of the Board of Directors of the company. In June of 1929 the building was purchased by George Frederick Emrick, a local funeral director, and opened with the name of the Emrick - Rawson Funeral Home where an open house was held June 22-23 1929. The name was changed to the Emrick Funeral Home in 1923.

Mr. Emrick started his funeral business in 1921 at 1144 Gallia Street, which is located just west of the current Temple Baptist Church, after having worked at another Portsmouth funeral home for several years. George was born in Butler County, Ohio on July 24, 1880. He was married twice, the first time to Charlotte Diedrich of Cincinnati, who predeceased him, and his second wife was Florence Hawkins of Wellston. Florence was a graduate of the Cincinnati Conservatory of Music and was an accomplished pianist and vocalist, having performed solo at the re-dedication ceremonies at Constitution Hall in Washington D.C.
Mr. Emrick died at his home on September 19, 1946.

It was in 1947 that Ralph Frederick Scott came to work for Mrs. Emrick. Mr. Scott was a 1931 graduate of the Cincinnati College of Embalming, and was in business in Wheelersburg, Ohio, and saw this as an opportunity to move his family back to his hometown of Portsmouth, where he was born October 10, 1910. In December of 1962, Mr. Scott purchased the business from Florence Emrick. In September of 1964 Ralph F. Scott II was discharged from the U.S. Air Force, and returned home with his family to Portsmouth to accompany his father in the business. Ralph was graduated from the Cincinnati College of Mortuary Science in 1967.

It was in 1967 the name of the establishment was changed to the Emrick-Scott Funeral Home. In 1978, Ralph II purchased the business from his father and the name was then changed to the Ralph F. Scott Funeral Home. The two men worked together for several years, until the elder Mr. Scott retired in about 1985. Ralph, Sr. passed away on July 23, 1990.

It was in December of 1987 that the third generation Scott came into the business. Carol Dawn Scott was the first funeral director in Scioto County to graduate with a Bachelor’s Degree in Mortuary Science from the Cincinnati College of Mortuary Science, and she is a practicing embalmer. In November of 1994, the funeral home opened a 1500 square foot wing to the south side of the original structure making the total square footage of the facility 3500. The new chapel is capable of comfortably seating 150 people, is handicap accessible and has many amenities to help assist the families we serve. 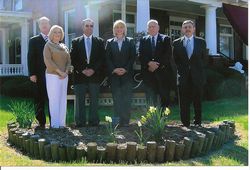 Our Location
Our Facilities

A year of daily grief support

Our support in your time of need does not end after the funeral services.  Enter your email below to receive a grief support message from us each day for a year.  You can unsubscribe at any time.